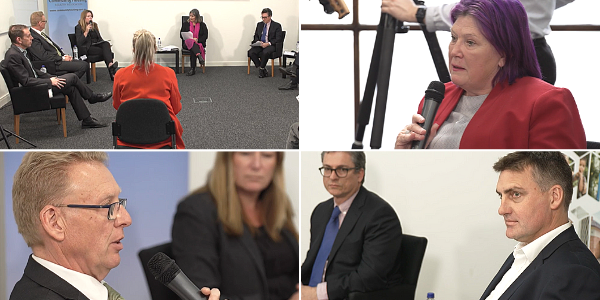 Facilitated by award-winning journalist Alex Sloan, the forum delved into the problems, implications and needs around social and affordable homes in Canberra, and discussed the policy solutions of the three major parties in the ACT.

Participating on the panel were:

They were joined by:

There was agreement around the room that there are currently immense barriers preventing people on low to moderate incomes from participating in the private housing and rental market, as well as there being a growing shortfall of social and affordable dwellings in the ACT.

AHURI research also indicates that the ACT will need an additional 9,000 social housing homes by 2036 to address current and projected shortfalls.

There was acknowledgement all around that the current COVID-19 pandemic has worsened the situation increasing housing stress, homelessness, and adding pressure to short-term crisis accommodation.

Both Mr Hannan and Mr Rowe pointed out that CHPs are an efficient vehicle through which to grow supply in social and affordable housing due to the lower cost to government, tight regulatory regime, higher quality of service and their ability to leverage their assets to grow.

Other states are taking advantage of CHP competencies with the AIHW 2019 Housing Assistance in Australia report showing that 19.7% of social housing tenants nationally live in homes managed by a CHP; 23.7% in NSW and more than 40% in Tasmania. However, the ACT falls short at only 4.7%.

The politicians on the panel did agree that there is a clear role for CHPs in addressing the growing need for social and affordable housing in the community, albeit that the three parties viewed this role slightly differently.

Ms Berry emphasised that both public and community housing needed to grow in the ACT and that the ACT Government was looking at levers within its responsibility to find ways to better work with CHPs now and into the future. Some of the strategies she listed included:

Mr Parton said his party’s soon-to-be-announced housing policy would help CHPs grow organically. He underscored the importance of increasing support for CHPs to become a bigger part of the solution in Canberra and described the situation as being urgent.

Although he was not in a position to announce the ACT Liberals’ upcoming housing policy, he had several suggestions on what additional support for CHPs might look like:

Mr Rattenbury, on the other hand, described the role of public housing as delivering housing for people in Quintile 1, and community housing as servicing people in Quintile 2. He described his party’s $450 million policy package to build 1,000 new dwellings, adding 400 homes to the public housing stock and 600 new dwellings to the community housing stock.

Mr Dal Bon outlined that in the past two years of NHFIC’s operations, the corporation had achieved $1.5 billion in loans supporting 2,000 new dwellings and refinancing 6,300 dwellings, saving the community housing sector an estimated $190 million over the period of the loans. However, none of the projects funded have been in the ACT although there have been a number of expressions of interest from ACT-based CHPs.

Mr Dal Bon observed that a lot of the conditions are in place to increase support for the community housing sector to make it a more viable proposition financially, such as low interest rates.

CHP access to land made up a big chunk of the debate. It was highlighted that the current conditions of CHPs paying full market price for land and the build, and then renting the properties for 60% of market rent was not viable.

Ms Middleton shared a case study of how Argyle was able to grow affordable housing supply in regional NSW made possible only by being gifted the land with no land tax or land rates payable.

Mr Dal Bon said one of their key priorities was to work with various jurisdictions to find ways to take land out of the cost and that most jurisdictions had land holdings which could be better utilised.

Mr Rattenbury agreed the land could be better utilised as it was a way of leveraging other people’s money to reduce the cost of providing affordable housing.

Ms Berry said the current ACT Government does need to investigate ways to work through the issues raised by CHPs around land access, and Mr Parton said that finding a solution requires strong will from all sides and that he would reveal more on the ACT Liberal party’s policy on this in the next several weeks.

On the whole, there was a well-rounded discussion about the different avenues to grow the social and affordable housing stock in the ACT, but it remains that there is a critical need to close the current supply-demand gap and put in place a systematic approach to continue to close the gap over time. This will require coordinated action across all levels of government to deliver the best outcomes for those in our community who are most in need.

Download a copy of the discussion points or watch a replay of the forum.